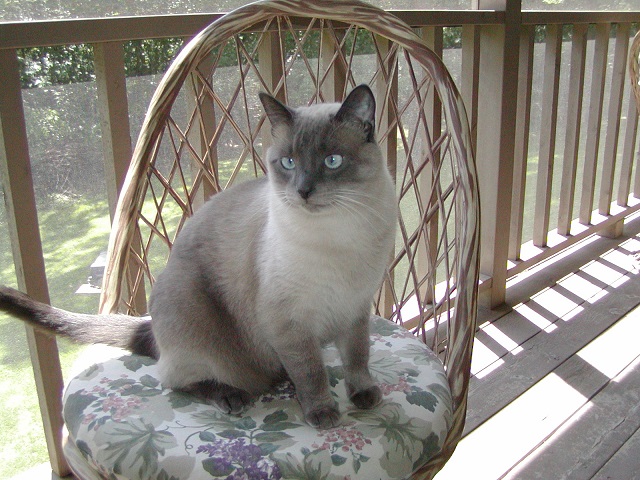 We are sad to announce that we had to put Mushi to sleep on April 8, 2020 at the age of 16 years due to a suspected blood clot that was probably caused by cancer.

We adopted Mushi from the Humane Society of Golden Valley on August 3, 2004 at the age of 10 weeks. Most of the cats that we have adopted over the years came to us as adult stray cats. However in 2004, we decided that it was time to adopt kittens. Mushi and Koyani were both Siamese kittens, but from different litters. So they were at first strangers to each other. When we brought them home, they did their usual hissing (as most cats do when they meet another cat for the first time) until they soon realized that they should be best buddies. Within a day or two, they played together, cuddled together, and slept together. 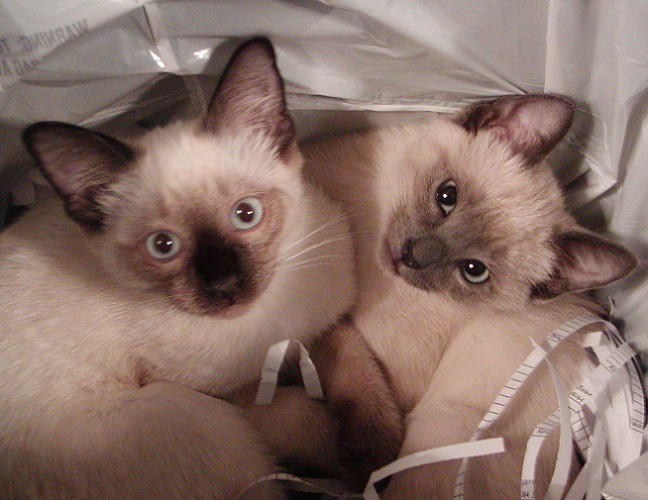 This picture from September of 2004 was taken when we found them cuddled up together in a waste basket. It is the picture that I use for my Catbox Studios logo.

Koyani was the older healthier kitten. Mushi seemed tiny and sickly. Shortly after bringing them home, Mushi began to lose weight and stopped playing. Kittens often get the feline version of the coronavirus. In most cases, they recover, as did Mushi. He soon was back to running and playing with Koyani, until his next medical emergency. All that rough and tumble kitten playing led to a dislocated knee. Our little kitten needed surgery.

Not to worry, that procedure fixed the problem. However, for the rest of his life you could feel a little bump on his knee from the surgery.

His next big adventure with the vet was when he developed a tumor in his leg where the vet had given him his vaccination shot. Apparently, on rare occasions, cats can develop tumors caused by their vaccination shots. In most cases, those tumors are cancerous. A cancerous tumor is called injection-site sarcoma. Fortunately, Mushi's tumor was not cancerous. He recovered from this second surgery just fine.

His next big adventure with the vet was the time when he got one of his claws stuck on the couch or a chair, which dislocated the claw at the knuckle. He had to have it amputated.

During all of Mushi's medical problems, Koyani was the healthy kitten. However, that soon changed. We suspect that the same coronavirus that made Mushi sick later caused Koyani to become sick. While most kittens like Mushi recover from the coronavirus, on rare occasions it mutates into FIP. One day Koyani was just fine. The next day his back legs were paralyzed. Within less than two weeks, he had to be put to sleep at the age of one and a half years. Mushi lost his best buddy.

Despite all of these medical issues, Mushi was perhaps one of the easiest going well natured cats that we have ever had. He was very good with people. While other cats would run and hide whenever company came for a visit, Mushi was always right there wanting to jump on their lap for a cuddle.

Most cats take a few minutes to situate themselves before curling up into a cuddle. Not Mushi. He could come running up to you and plop himself down on your lap and act like he had been sitting there for hours. He was also very good with the other cats.

Bijou is another cat who loved to cuddle with Mushi, often at the irritation of Teyla for stealing her man.

But Mushi also had a thing we called the Mush factor. If he thought you weren't paying enough attention to him, he would jump up on your desk and start knocking things off. At night, he used to knock everything off my night stand to wake me up and pay attention. I finally moved everything off to try to get him to stop. Then he would bat my face and wake me up so that I would take him in my arms for a cuddle.

Mushi also loved to sing. Siamese cats are known for being very vocal. Mushi would sit in the stairwell, I suppose because of the acoustics, and meow as loud as he could, for no reason other than he liked to hear his voice eco through the house.

A few years ago Mushi developed yet another medical problem. He began tilting his head to one side when he got up to walk. While it looked cute to have him look at you with a tilted head, we knew something serious was happening. The vet thought it was either an inner ear thing that caused him to lose his balance when he stood up, or it could be a tumor growing in his brain. We thought he probably didn't have much time left, although it was hopeful that he seemed to be stabilized.

Then his behavior changed a few days ago. He stopped cuddling with the other cats and would lay under the dining room table, a behavior that is typical of a cat who is not feeling so well. I noticed that it was getting more difficult for him to walk as he would lose his balance and then lay there like he was tired. Then last night after we had a zoom meeting with our Congregation, he went downstairs to use the cat box and let out a howl like he was in pain. I noticed that his back legs stopped working as if he was paralyzed.

We took him to the emergency vet in St. Cloud, and they suspected that he had a blood clot, a condition known as FATE which is very painful. We sat in the car with him for an hour and a half cuddling with him while waiting for the results of the X-rays that they had taken. We were able to get him to purr and relax in our arms while waiting. The X-ray results suggested he had numerous cancer tumors throughout his body, which can be one of the causes for the blood clots. If his head tilt was caused by a tumor in his brain, it had now spread. At age 16, we were not going to let him suffer in pain any longer, so he was put to sleep at about 12:40AM.

The sad thing is I always go into the room at the vet with our cats when it is time. I want to provide them with comfort during their final moments before they fall asleep. This time, however, we are in the middle of the worldwide coronavirus pandemic, and I was not allowed to go into the clinic to be there with Mushi. We can only hope the vet and technician were loving and kind to Mushi as he fell asleep. Now I have a new appreciation for the pain other people have to go through right now as they cannot be with their loved ones in hospitals and nursing homes because of the quarantine restrictions due to the coronavirus.

It brings us comfort to know that Mushi had a good life. He was a good boy. 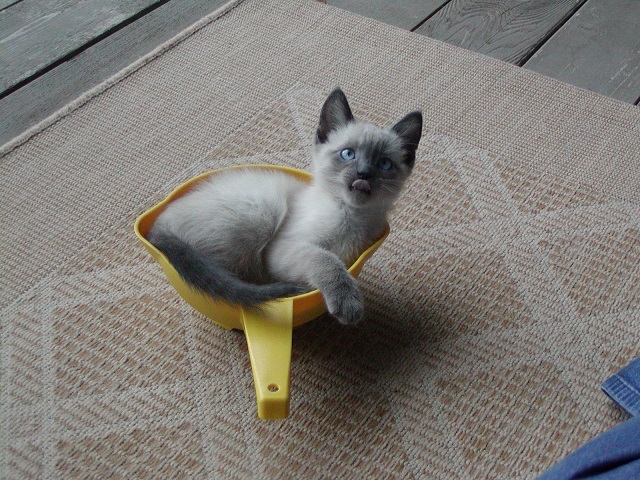 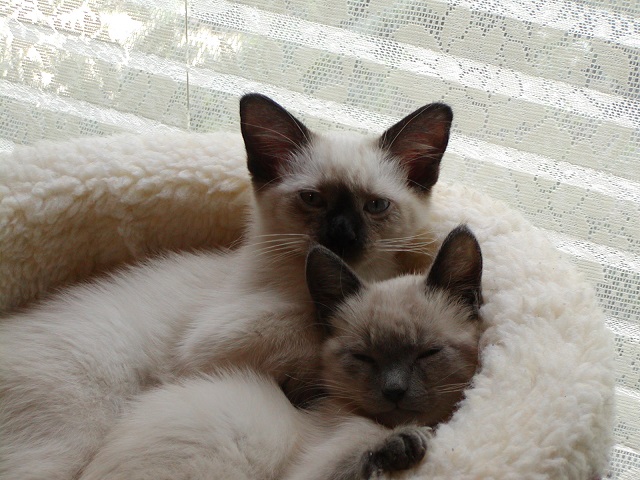 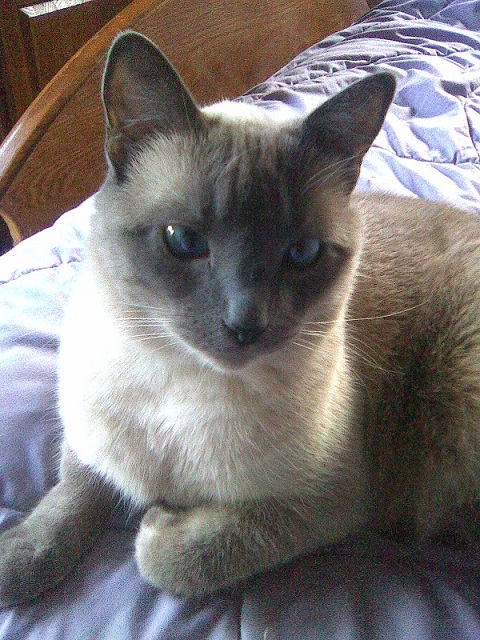 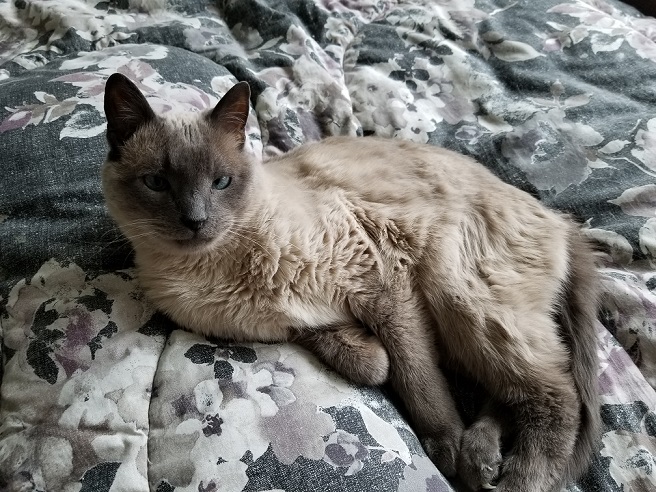