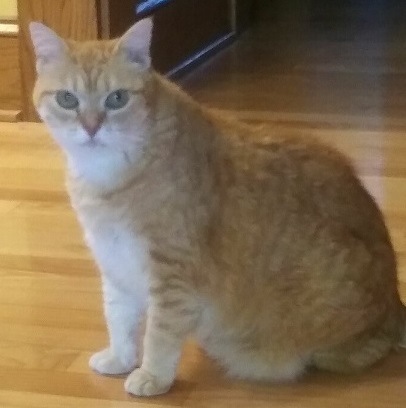 We are sad to announce that Bijou died peacefully in her sleep on December 7, 2021 at the approximate age of 15 years due to suspected bladder cancer.

Bijou came to us as a stray in the fall of 2008 and lived in our woods and wood pile for several months. We fed her on our back patio before letting her in the house in January of 2009. We believe she was either a litter mate or close relative of Monique because even though we brought them in the house two years apart from each other, they both came from the farm across the road, both were spayed, and both immediately acted like they knew each other.

Bijou was one of those cats that illustrate how each cat has a unique and distinct personality. She was a semi-feral cat that lived on her own for the first few years of her life. She recognized humans as a source of food, but would not allow anyone to touch or pet her or pick her up. We had to put the food down on the patio and then walk away before she would go over to eat.

After several months of this, Susan decided to capture her to bring in the house. She put the food in a cat carrier with the door open and then walked away. It took a while before Bijou decided to be brave enough to go inside the carrier to eat. Once inside, the plan was for Susan to quickly shut the door. We use to say that Bijou had the strength of ten men, because it took several tries before Susan managed to get the door closed and secured while this wild feral cat was fighting for her life to escape.

After a trip to the vet to get checked out, we isolated her in our guest bedroom, which is standard procedure anytime we bring a new cat into the house. Bijou was not a happy camper for being captured and imprisoned in our home. I thought this must be a bad idea to bring in a feral cat and try to tame it. It was not going very well at first because she really did not appreciate being captured.

Susan slept with her in the guest room for the first night. I decided to give it a try for the second night. I slept in there, but I completely ignored her, and she ignored me. We developed an understanding. I fed her but did not touch, and she allowed me to feed her, clean her cat box, and sometimes look at her. She knew where her food source was coming from, and I was teaching her that I was not that person who trapped her and captured her. 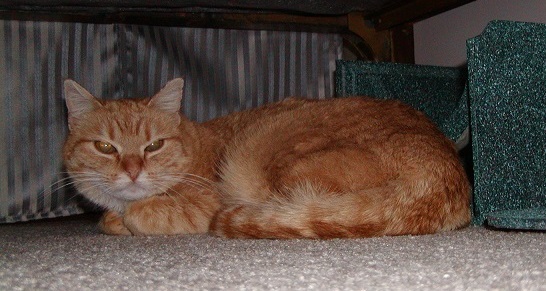 Bijou under the bed for the first few nights in our house.

About the third or fourth night, I woke up to find Bijou rubbing her face against my face and purring. What? What is this? Why is this feral cat acting tame?

Bijou had decided to bond with me, with one understanding. I could feed her, she could rub against me, but if I ever tried to initiate the touch or pick her up, she would run away.

This went on for many years. I could sit on the couch, and Bijou would jump up on my lap to sit and purr. But if I ever tried to bend over to pick her up in an unapproved spot, she would run and hide. I tried to explain to Susan that Bijou had approved spots, where she was OK with limited human contact, and then there were numerous unapproved spots where you could look but no touching.

Susan needed to learn her boundaries. Bijou would sit at a distance and look at her, but Susan was not allowed to approach or touch. Of course Susan would not obey these rules, and the two of them had many evenings with Susan chasing Bijou around the house to be captured. Once captured, she could hold her and cuddle in bed with her, but then after a few minutes, Bijou would bolt and escape with the strength of ten men.

Bijou loved Mushi and would often cuddle with him on the bed. Mushi also loved to lay next to Susan's face during the night. After Mushi died, all of a sudden Bijou goes over to lay next to her face. After 11 years of not letting her touch her, Susan is now her best friend. We think Bijou associated Susan with Mushi, and after Mushi was gone, Susan became her new Mushi. Bijou also allowed her to touch and pet her, and the whole approved spot and unapproved spot thing seemed to disappear.

Bijou continued to sleep with and cuddle with Susan for the next year and a half up until the day she died.

It is always hard to let someone you love go. Bijou was a very special member of our family and will be greatly missed. 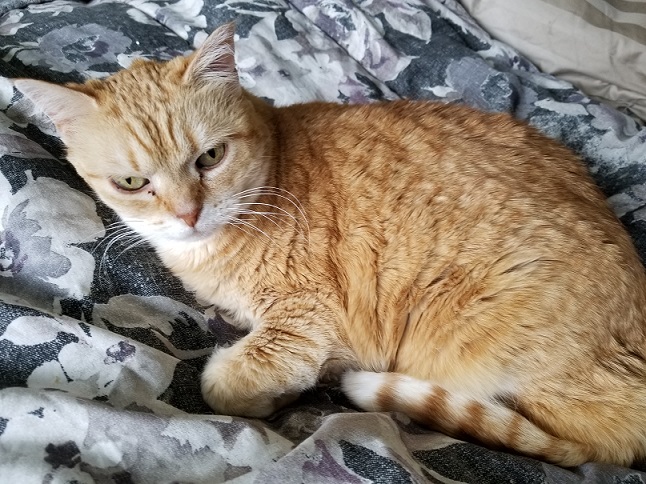 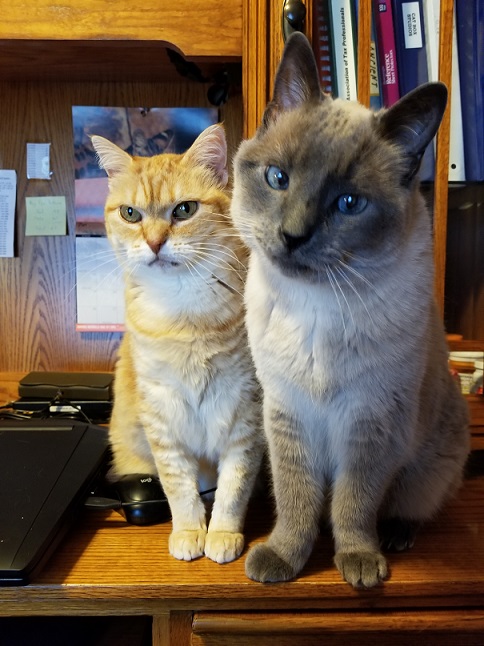 Bijou and Mushi were always together.